Megan lives in Cornwall but was visiting Isobel for a few days and I took this opportunity to meet her at Wey Kayak Club for a test paddle. I was now aware that Megan and Isobel knew each other, in fact it was Megan that originally brought the C1 DW opportunity to Isobel’s attention. I still hadn’t realised that they had paddled DW 2013 together in a K2.

Anyway, they both got changed and Isobel decided to accompany Megan on the water in a K1. Now if that had been me and my mate was watching me paddle a C1 for the first time and they had already successfully done the same, I would have felt somewhat under pressure, not so Megan it seemed.

Again we started with kayak blades but before Megan had put the boat on the water she had shouldered it and was asking what was the best grip for running a portage!

Based on previous feedback from Isobel, I has already put the high seat in as I didn’t think stability would be an issue and so it proved as Megan sprinted up and down a few times and then glided in to the side to swap paddles.

Without a moment’s hesitation she launched the boat into the stream and was sitting and switching like a pro. OK not quite that good to start with but with a look of concentration she experimented paddle grip, blade entry and power stroke.

Megan comes over to the dark side

As Isobel was also on the water in a K1, I had the opportunity to see a direct comparison.

Told you it was easy!!

It’s no wonder that they didn’t have any stability problems, look what they are used to paddling!

The production boats were at last ready on Friday 13th December and as Megan had accepted my invitation to paddle C1, I arranged to meet her at Roadford Lake near Launceston in Cornwall the next day where she had entered a race.

Saturday and it was blowing a gale. I’d had a late night drilling the seat fixings, fitting a footrest, buoyancy and affixing the stickers but I left at 11:30 to meet Megan after her race at 14:30. I stopped several times just to check that the boat wasn’t going to blow off and then received a phone call to say that the event had been cancelled due to the high winds and risks to safety.

We agreed to meet anyway and hand over the boat so I arrived at the watersports centre at Roadford lake and no sign of Megan and she was not picking up her mobile. Eventually she appeared having taken the opportunity to join a training paddle on the very lake on which the race event had been cancelled due to safety concerns!

There was no point in trying to put the boat on the water due to fading light and “the dangerous conditions”….ha! 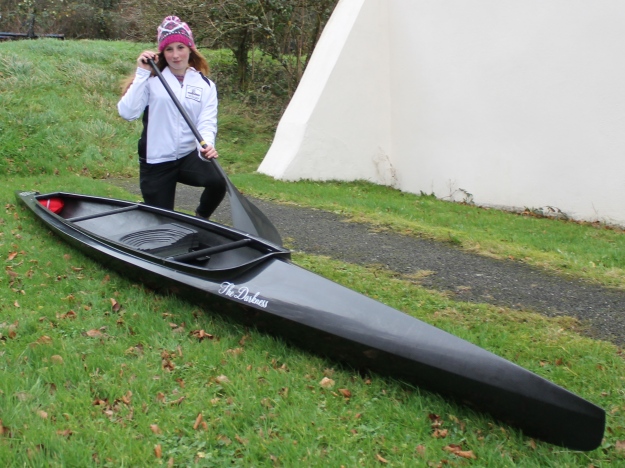 So we took a few pictures and put the boat on Megan’s V rack. I noticed that the passenger seat had been reclined almost horizontal to make way for a surf board, “so you surf as well?” I asked, “I live in Cornwall, everyone surfs”.

I went through the same questions I’d asked Isobel about training, nutrition and DW organisation coming away with the opinion that a little more structure may add some value. “So, if you live in Cornwall, when do you get the opportunity to familiarise yourself with the portages?”. “I have actually done the Waterside and the DW a few times”. If I’d have done my research earlier I would have known, Megan: 2 – Nick: 0.

Both boats are now allocated and handed over to two women athletes who have the utmost confidence in their own ability and from what I have seen and what I now know, have an excellent chance of making it to Westminster later this year. Let’s see what happens in the next 104 days.