I’ve been experimenting with a few footrest and seat options, edging towards kayak type solutions. The main reason was because of a couple of bargains on e-bay too-good-to-miss.

The first was a Nelo carbon seat “buy-it-now” at £35, so I did. I mounted it on a plywood platform and bolted it underneath the seat support flanges. It’s about 7 cms off the bottom of the boat which is similar to a K1.

I then thought I’d try an improvised pull-bar. For this I used a webbing belt and a couple of cable ties, just like the old days.

I tried it all out on the K&A from Marsh Benham to Newbury and back. It was very impressive. A slight pause to get the feet in, but a much more positive platform from which to put the power in.

As it ‘appens, the same guy from whom I bought the seat on ebay, was also selling “Nelo K1 Wooden Foot Plate with Adjustable Foot Bar”. It was originally listed at £55 but there were no takers. It was re-listed and I eventually secured it at £35.

I made a couple of plywood extensions to the foot rest flanges and fitted it into the boat.

I thought it was un-necessarily complicated and heavy until I sat in the boat with bear feet and curled my toes over the top of the plate. Wow, what a grip. I’m looking forward to testing it tomorrow.

Now all the DW nonsense is over and done with, I need to get some more exposure for the boat. What better way than to race a few Haslar events.

So last weekend, Sunday 8th June, the sun was shining so I popped up to Falcon rowing and canoe club in Oxford for their event.

I am a Div six kayak paddler, so I thought I would have to race Div six for canoe too. However, this turns out not to be the case. Apparently one can be classified differently for the two types of craft. I wish I had known that earlier as the Div nine to seven classes had raced in the morning.

No problem, all I have to do is race Div 6 and get demoted.

During the warm up I paddled down to the portage to check it out. The water was really choppy due to the breeze, paddlers, rowers and motor craft and I felt compelled to J stroke a couple of times rather than risk a switch.

The lead up to the start was very well organised and the twenty three boats were “walked” up to the start by a Marshal. I expected to get dropped early so I held back a bit, but by the time we set off, I was in line and gunning it.

There was a lot of wash and one kayak capsized, but the adrenalin blew away any of my concerns about stability and I just dug in. I then realised that the kayaks weren’t speeding off in to the distance and that spurred me on.

The top turn took a few paddle strokes to get The Darkness to come round and the downstream leg was much faster and bumpier. I saw two more kayaks emptying out and realised that I was actually catching a back marker.

By the portage I’d caught him and worked my socks off to drop him by the turn.

Whilst I was bringing the boat round at the bottom turn, a lady Marshal commented “isn’t it usually a woman in that boat?” Not today!

It was a bit twisty coming back upstream, but I finished in one hour twenty minutes. This was thirteen minutes behind the winner and nine minutes after the fifth paddler, who was also promoted to Div five.

There was one kayak nearly three minutes behind me who had the D? by his name, plus two which retired. Does that mean I am now “stuck” in Div six for canoe and kayak?

I really enjoyed the well organised event, and a number of people were kind enough to comment on the boat. I even got one of the Banbury high-kneelers to have a quick go in The Darkness.

I have now sold my Jaguar K1 on Ebay, so I’m now committed to The Darkness. I may paddle it as a kayak in the next race. However, if I can get demoted in the canoe class, I could paddle canoe Div seven in the morning and kayak Div six in the afternoon.

I wonder if that’s permissible, I’ll have to ask a grown-up.

Today was the Devizes to Westminster international canoe race prize giving, a celebration of achievement for the paddlers who completed the race, and won their particular class.

It is 33 years since I attended when in 1981 I collected third prize for the senior event. It hasn’t changed much although the number of trophies has certainly grown. However, I wasn’t there to collect anything, but to see Megan pick up the award for winning the C1 event and become the first women to do so, IN MY BOAT………yeeeessssss!

There was a good speech by Ben Hunt-Davis a rowing eight, gold medallist in the Sydney 2000 Olympics, who also completed the senior race this year. He also presented the prizes.

The closest I will ever get to an Olympic gold medal

It was proud moment to see Megan collect her trophy. 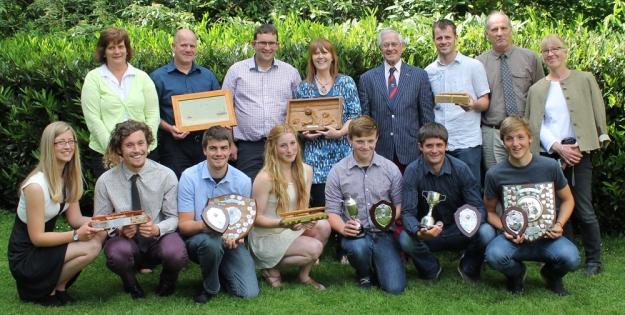 But this was the best: