Banbury Canoe Club ran their Hasler event last Sunday so I thought I’d pop up and enter the Div 7 race in The Darkness.

The venue in the middle of Banbury is not really appropriate to run an event for several hundred paddlers, but with excellent organisation, Banbury Canoe Club pulled it off.

All the divisional races started one after another and the queue for the start was massive. So much so, that the other canal traffic was asked to wait until everyone had left.

The 23 entrants in the Div 7 class were split into two starts, odds and evens. Even so it was a squeeze to get 11 boats across the width of the canal. However, I had a cunning plan!

When the starter said go, I paddled 10 metres over the start line, got out, picked the boat up and ran like hell, scattering spectators like chickens in a farm yard. I got in front of the group and put back in. By the first portage, most of them had overtaken me, but I got out early and sprinted past 5 boats.

There were two kayaks in front of me and they were overtaking a narrow boat before a bridge. I sprinted like the devil and just squeezed past before getting crushed. There was no way the boaty was going to slow down.

The turn was in a narrow part of the canal, but instead of turning on the water with about one million sweep strokes, I went past the turn, got out, rotated the boat (hitting the turn Marshal on the legs……sorry mate) and got back in again. This time I maintained my position and headed back.

The narrow section under the bridges were very choppy, and I lost a bit of time. I also lost a couple of positions, but re-gained them at the portage.

I eventually finished 15th out of 23 but frustratingly, 60 seconds quicker and I would have been 5th.

We all look back and think what might have been, but it was good fun and that’s what it’s all about.

Lucy Perry from Falcon also paddled The Darkness in the Div 9 event. Unfortunately she decided to swim at the start so her 18th Position out of 23 could have been bettered. However, one more C1 Hasler and she will have qualified for the Hasler final leaving loads of time to qualify in a K1 too. 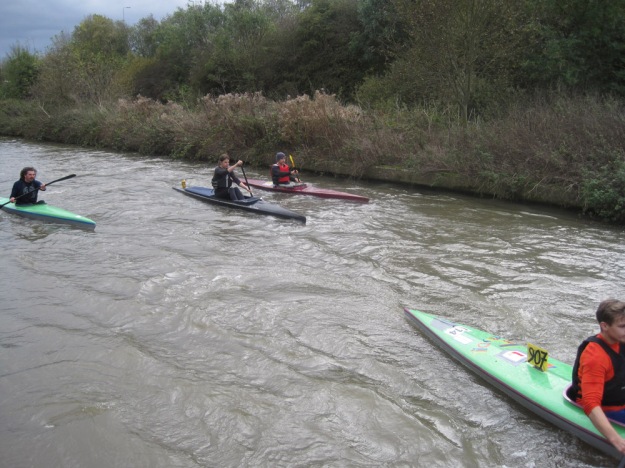 Anyway, I’m off to do some sprint training and I don’t mean on the water!

Paddled the BCCC H&H this morning at Mytchett on the Basingstoke canal. Absolutely ridiculous high mid-October temperatures. The threat of rain didn’t materialise, though there was a stiff head wind out to the turn which was bringing the leaves down on the canal.

Used the wire on the bow to deflect the leaves, which works really well so avoided the “resistance training”.

I was the first of two boats (my C1 and a K1) off the start, as the slowest go first, chased down by the big boys and girls. The K1 dropped me by about 50 metres at the turn (turned out that he was a better paddler than he’d admitted and should have started later).

The thing about time trials is that it’s difficult to gauge how well you’re doing. It’s important to concentre on style and ensure a strong paddle throughout the whole distance. It often amuses me to see paddlers sprint for the line, why didn’t you use that energy more effectively earlier on?

I was disappointed to see some of the K1s wash-hanging K2s. It’s supposed to be an individual effort. Your result doesn’t reflect your ability if you use someone else’s effort.

The last time I paddled this course, I recorded 1 hour 11 minutes. This time I finished in 1 hour 2 minutes and 36 seconds, so I was quite pleased. I also managed to beat three kayaks and lost to another by 1 second.

That’s the other thing about time trials, looking back and thinking where you might have lost that second, and where you could have gained two. I know that the turns are where I lose most of the time.

Anyway, a well organised event which will be repeated throughout the winter on the third Saturday of the month.

I joined 28 kayaks on the Div 7 start line for the 4 mile, no portage “marathon”. Unfortunately I let myself get squeezed out on the start by a couple of kids!

Squeezed out at the start

I lost out on the turns to the other 5% and finished dead last, except one, so I didn’t even get demoted!

Wish I had a rudder!

A brighter aspect of the day was seeing Lucy Perry from Falcon Canoe Club paddle The Darkness in the Div 9 race. She was the only canoe in a field of 32 boats. It was her first C1 Hasler and she was understandably, a bit nervous. However she looked comfortable, stayed upright and managed to beat 7 kayaks home.

I mounted the GoPro on the back of the boat again and posted a short summary video on YouTube.

I do enjoy being on the start line of a Hasler race, but I’m clearly not competitive in a canoe. I would prefer a much longer race and also some portaging, but that doesn’t start to happen until Div 6 and I can’t see that happening any time soon. I’ve won the Waterside Series twice in C1 and got to Teddington in the DW in C1. The best I can get from Hasler is a 4 mile “sprint”, some bumpy water and I have to wear a buoyancy aid.

There has got to be something better than this.