An exciting email today from Neal, the Naval Architect who is turning my ideas for a two man version of The Darkness, into a C2.

I know from testing a concept boat converted from a K2, that it will work. The challenge is how to expand the C1 shape into a larger version, incorporating the lessons we learnt from testing.

It isn’t just a case of stretching and widening The Darkness, there are a whole load of fluid dynamics algorithms to process to ensure that it will perform properly on the water and support the weight and power output from two paddlers.

These are still early days, but it’s great to see some tangible progress. 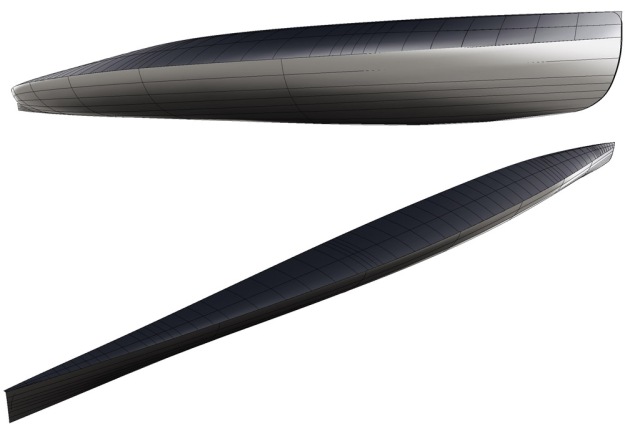 The Double Darkness, still in the womb!

We still need to complete the fairing and refinement, plus we want to incorporate the gunwale flange which supports a spay deck into the main moulding, so we don’t have to add it later after the main boat infusion, as we do for the C1.

This should help reduce weight, enable faster production and help keep costs down. We shall see.

I’m increasingly optimistic that we’ll have a boat ready for DW 2015.

Paddled the 16.6 mile Basingstoke canoe time trial today. I did this last year and recorded a time of 3 hours 21 minutes.

The event was a time trail, so individual effort against the clock. It was the same course as last year and some of the competitors paddled again this year.

The event was very well organised with good pre-race information and loads of marshals.

This year, the weather was appalling, it rained non-stop the whole race.

• I’m a year older
• It rained non-stop and I got soaked.
• My kit got very heavy due to the rain
• I had to use a full spray deck which caused some delay at the portages
• There were a lot of leaves on the water which built up on the bow and had to be periodically shaken off

• I have another year’s experience
• I know the course

I was the second boat off and had “clean” water for nearly the whole distance, although the autumn leaves on the water’s surface were very irritating, it was like paddling in soup in some parts! Luckily I had my “weed deflector” (bent bit of coat hanger wire) on the bow so I didn’t suffer half as much as some. A lot of crews had some good resistance training.

Due to the rain, I used a full spray deck which delayed me at the portages a bit, but reduced the amount of water in the boat.

My pace was strong and sustained and I reached the turn 3 minutes quicker than last year. I had an energy gel and started on the return leg.

It was nice to see the other crews coming towards me and everyone was in good spirits despite the rain.

I portages the lock and had my last energy gel. Still no one was in sight and I was only passed by one K1 about a mile before the finish, and one K2 caught me just before the line.

The table below shows the solo boats which paddled both in 2013 and 2014. It can be seen that all but two recorded a slower time than last year. This would be expected due to the poor conditions compared with 2013.

All these paddlers are local club athletes, so know the course well.

Harry Veness was 20 seconds quicker but I was a colossal 12 minutes 19 seconds faster!

It would be expected that competitors would be slower due to the poor conditions and you can see that the top kayak paddlers were nearly 2 minutes slower. This makes my time improvement even more remarkable and I was an average of 45 seconds per mile quicker over 16.6 miles.

There was no super-human surge of energy, but a sustained and consistent improvement in efficiency over the duration of the effort.

Onward to the Ross Warland 20 mile challenge at Banbury on Sunday.

One of the nice things about the approach of winter is the increase in the number of “proper” canoe marathon events. A Div 7 Hasler “marathon” race is no more than four miles and rarely encompasses a portage. It is more of a sprint then a marathon.

So, it was off to Milton Keynes for the start of a fifteen mile race with four portages, along the Grand Union canal.

The event was promoted by Leighton Buzzard canoe club and the organisation was excellent. The pre-race instructions showed the location and nature of each portage, plus a map of the course. They even created a Facebook page.

The start was divided into three phases. Annoyingly, this was based on Hasler division status which is an indication of speed, not experience or competence. As I’m a Div 7 canoe paddler, it meant that I had to wear a buoyancy aid ON A CANAL!

So, we all congregated on the water ready for the start, and after a two minute silence for remembrance Sunday, the Class A K2s set off.

It was great to see so many canoes on the water, we just love a decent distant to paddle, with the occasional opportunity to stretch our legs.

The C1s were in the same class as the K1s, but as we’d pushed our way to the front, they decided to set us off on our own start. Of the five boats, I got the best start and gained half a length on the field and had the benefit of reasonably clean water.

However, Dave Fryer moved up on my right side and we came together. I eased back, and for the next four miles sat about 5 metres behind. We passed two C2s and then a couple of K1s caught us, and I struggled with the refracted wash from the vertical sides of the canal. This allowed Dave to pull away by about 100 metres. I decided to get out and run for a while and felt much better when I got back in.

The first portage was short and fast as was the second. The third portage was a long one past three adjacent locks. I had just been overtaken by a K1 before the get-out. With a boat weighing 8 kgs, I was able to run the whole distance and I never saw him again. I’d also caught another C2 and I stayed with them until the last portage. Although I got back in before them, they had the strength the put 10 metres into me before the finish.

Dave Fryer had beaten me by just under two minutes. However the day was not done and had a final twist. Out of five C1s, three (Dave Fryer, Lyndon White and Tom Barnard) were disqualified for not wearing a buoyancy aid, so I was promoted to third place, beaten by two K1s:

I was sorry that the guys didn’t get a time. It should have been spotted at the start. It is a safety issue but these guys are very experienced paddlers and I doubt if they were at risk. However rules are rules and they apply to everyone.

It was good to race a descent distance and the event is pencilled in for next year.