I hate Waterside B, but like homework, it has to be done as part of the Series! The downstream leg is lovely. It’s fast with some interesting currents and doesn’t take too long to get to the turn. Why can’t it stop there?

The return leg is always bumpy, hard work against the stream, involves lots of running, and the water and portages are crowded with boats coming the other way.

It didn’t make this year any easier as I was suffering from the flu. Against the strongly expressed views of my wife, I decided to paddle anyway. “Nick, you are brave and intelligent to take this on, even though it will impact your recovery” was what I think I heard.

Anyway an impressive armada of ten C1’s embarked upon the 17.5 miles and 19 portages from Newbury to Aldermaston and back. Anthony Wilson was new to the start line in a recently acquired J203, as was Tom Fryer, Chris Hotchkiss and Pete Jones. Dave Whitby was ready to go in his prototype boat, and Tom and Lyndon in their Advantage’s. The only lady C1, Sue in The Darkness, Marcin in the high-kneeler, were yet to show.

The early starters had a pretty clear run to the turn at Aldermaston. There isn’t a lot of overtaking and the only race tactic is to paddle as fast as possible.

The Aldermaston luck cut to the turn was choppy and congested (nothing new there then). Going back, as the course re-joined the river, the last few days’ rain made progress against the current slow. I decided to portage the mile up to the lock, as did quite a few others.

Marcin in the high kneeler was on his way downstream followed by Sue. Later starting, they were to get the worst of the increasingly deteriorating weather.

From then on the head wind, plummeting temperatures and the incessant current, made for a challenging race and a dilemma of whether to paddle or run. I ran a few sections, especially the one to Bull Lock, keeping pace and eventually overhauling the winning C2.

Tom pretty much ran most of the way back, and it paid off because he just beat Marcin to first place by 32 seconds. Marcin must have suffered in the exposed high-knee position.

I was glad to finish, and the results were:

In the series, Tom closed the gap slightly on Marcin, and Pete cut my third place advantage to two minutes.

Hopefully I’ll be fully fit for C, and re-establish a better cushion.

Sunday 15th February saw the start of the 2015 Thameside race series with the first round beginning at Aldermaston Wharf and finishing at Reading Canoe Club.

I wasn’t down to paddle this race, but I thought I’d go and watch the first few miles on my bike. As I was cycling to see the start, I saw Dave Fryer walking back to his car, so obviously he wasn’t paddling either, but I believe he saw off his son Tom, racing the C1 class in a Wenonah J203.

I’d setup a GoPro on the peak of my hat to try and capture James Prowse paddling The Darkness, and had also taken a camera.

There were four boats in the C1 class including Tom is his trusty Wenonah Advantage, and Chris who had borrowed a J203 for this race.

Tom, Chris and some Canadians in a Canadian!

Tom and Chris started together, and as they finished just over three minutes apart, I guess they saw quite a lot of each other. James started in the next wave and the first I saw of him was sprinting over the first portage.

He can run too!

I managed to keep up on the bike and get some reasonable footage which can be seen at:

An interesting example of “limbo dancing” at about 2:20 as James negotiated a very low bridge.

The final result of the C1 class was:

There’s a lot more photographs of the events at: 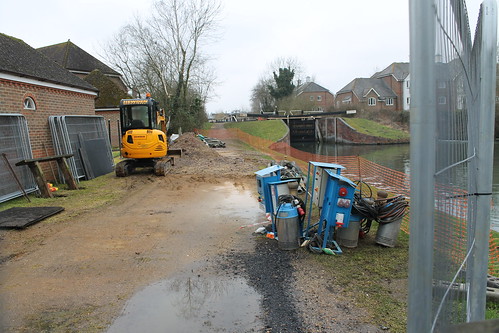 A great day on the water for the opener of the Waterside Series. 13.5 miles from Great Bedwyn to Newbury incorporating 21 portages. A record ten single canoes entered.

I was a bit concerned about the possibility of ice on the course and was pleasantly surprised until the last couple of portages before Newbury. Two, half mile stretches of ice meant that we had to get out and run. I was so glad that The Darkness only weighs eight kilograms, and felt so sorry for some of the junior crews who were carrying “monster” boats.

The race started well, it was a bit cold but I soon warmed up by the second portage. I was able to catch the three C1s which had started before me.

The new paddle was working really well, such long, slow but powerful strokes, but I was tiring towards the end and the next day I ached a lot in my right leg.

I lost some time at the get out points, mostly due to poor canoeing etiquette. I don’t blame the juniors, and I expected some of this on the first race of the Series.

I managed to overtake loads of crews on the portages. I ran both locks at Froxfield, but this was a mistake. I’m not the runner I thought I was and slowed somewhat on the second pound, lesson learnt for C and D.

Marcin overtook me in the high-kneeler just before Kintbury and won the day with a time of 2:11:07. He doesn’t even seem to be trying, but has such an efficient stroke, and boy can he run!

In sixth place also in The Darkness, was the only lady paddler Sue Digges la Touch, in her first competitive race. She was followed by Chris Hotchkiss who swapped his Apache boat for The Darkness, two days before the event.

The Poole Harbour pair of Tom Barnard and Lyndon White came in next, both paddling Wenonah Advantages, and finally David Whitby from Colet who was paddling a prototype of a new boat design.

So, it was off to my favourite testing ground at Marsh Benham. I took a spare Wenonah blade in the boat, just in case.

I pushed away from the bank and tried a few tentative strokes, seemed OK. So I just paddled off like any other time and was soon into a rhythm.

The blade entry isn’t as clean as the Wenonah because of the grippy edge, but the power phase is much more positive and I get more consistency through the whole stroke. Once I started to increase the power, I noticed that the blade was flexing slightly. At first I was concerned that it would break, and that is wasn’t as stiff as I’d planned. But I now think this is a good thing as it absorbs the initial “snatch” rather than my arm muscles taking the hit.

I shall get my “marketing department” to think up a catchy strap line for the flexible blade, something like “flexible energy return system technology”, the paddle with FERST. Hmm, think we need to work on that.

Big surprise when I got to the portage and back-paddled to brake and bring the boat in, it almost stopped dead, wow! So if any small children run across the canal, I will be able to stop in time. 🙂

By the time I’d finished the session, I knew that this was much closer to what I was looking for, but I need more testing.

When I got home, it suddenly occurred to me that the flexibility could be due to the fact that the resin was still “green”. I’d stored the paddle in my garage and it was much too cold. So I popped it behind a radiator for a couple of days and it got a lot stiffer.

Today (Sunday) I decided to paddle from Odiham on the Basingstoke canal, an eight mile session with no portages. This meant that my rhythm would not be interrupted and I could also assess the impact as I got tired.

I popped my GoPro on the front deck so I could analyse how the paddle was working in the water, and also how (in)efficient my paddle stroke was.

It was a cold, blustery day, but the water was mill-pond and the Basingstoke canal is quite sheltered.

I takes me a good 20 minutes for my body to wake-up properly these days, but I find that eagerness to get going compensates for poor technique, and I don’t see any time differences from the outbound leg to the return one.

Thirty minutes into the session I was really pulling on the paddle. Some of the flexibility is still there (as planned obviously!!) but it’s much more positive now and I can really use my arms, shoulders, trunk, stomach muscles and legs to get a full, long and controlled stroke. (Or that’s what it feels like).

The longer shaft is certainly allowing more shaft length between my lower hand position and the top of the blade, surely there’s some leverage benefit there?

The video shows some footage from the return leg, so I’ve been going for about six miles. The paddle looks like a snow clearing shovel! The clip does show that I don’t paddle evenly on both sides. I will try to submerge more of the blade on the right hand side in future.

In summary, I’m very pleased with version three. OK, it’s not the prettiest paddle in the world and it needs a more professional construction, but it does what I want………………….for now.