The series kicked off with the first time trial, in conjunction with Worcester Canoe Club Hasler event last Sunday.

Worcester is a great venue, and the river Severn is a nice piece of water to paddle on. The weather was kind, dry and not too hot. Other than the lack of entries, it went off ok and gave me the opportunity to test the administration and organisation.

We setup our registration desk next to the Hasler organisers. We need to get a sign to show that it’s sign-on for the canoe event, as lots of Hasler competitors tried to get us to take their entry. (yeah, we were tempted!!)

I also should have advertised the next event in advance, lesson learnt.

I had generated too much paper work. I replicated the forms and process from organising cycle time trials, but the difference is that riders all have to register in advance by two weeks, so all the paper work is prepared. I’m going back to good old fashioned carbon paper. I wonder if one can still get it?

A couple of friends were despatched to the start with a clock, start list and union flag, whilst I marked the portage and finish. I then paddled upstream to the turn with a marker buoy. On the way up I noticed that the turn buoys had been deployed for the Hasler turns, I hoped my paddlers wouldn’t mistake them for their turn.

I used a large piece of lead to anchor the turn buoy and nearly capsized when I dropped it over the side. Then I waited for the paddlers to start, portage and paddle up to the turn.

First to arrive was Stuart Lovell paddling an Apache. He turned and was soon out of sight going back downstream to the second turn which was back at the start.

Shortly afterwards Lucy Perry turned up in The Darkness. Unfortunately my turn buoy had “capsized” by them.

Once they had turned, I collected the buoy and paddled down to the finish. I setup the chequered flag, made sure I could see the clock, and found a whistle to indicate when a boat had finished.

Stuart came into sight, paddling hard for the line after the last upstream effort. 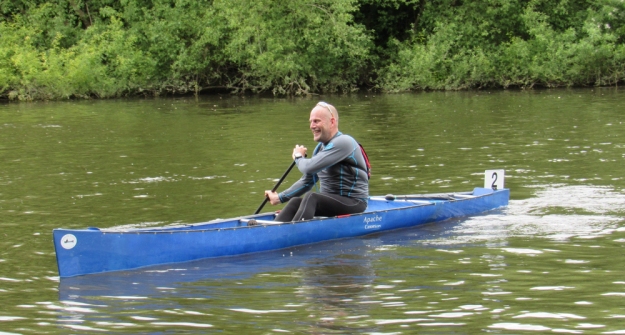 Stuart, after setting an impressive time

We now have benchmarks for ladies sit&switch with Lucy Perry (Falcon) going under two hours with 1:55:00 in The Darkness, and Stuart Lovell (Whistable CC) setting a male target of 1:39:23, paddling an Apache.

There was a lot of planning and organisation for two paddlers, but it was good not to have a lot of competitors whilst I sorted out how to run an event.

It’s going to be a challenge to get these races on peoples’ radars and generate the enthusiasm to increase participation, but the first one is done and dusted and it’s onward to Reading on May 31st.

C is for canoe.

The majority of clubs in the UK are called canoe clubs, although some use the name kayak club. All clubs do provide excellent opportunities for canoeists, up to a point. There are learning courses for new-comers and juniors. There are long, leisurely trips, and also prospects for wilderness and camping expeditions. But canoe racing is usually the domain of paddlers who like to opt for something different, and I have enormous respect for those athletes who have mastered the high-kneel paddling technique.

With some many prospects and choices for kayak racing, it is easy to understand why the majority of paddlers engage with that particular aspect of the sport. For those of us who like to race canoes, it is less easy. Yes, there is the Hasler marathon race series, but it is difficult to progress when racing against the quicker kayaks on courses where they are better suited.

In order to address the lack of real racing openings for canoes, I decided to organise a set of time trials throughout the summer, just for canoeists. In September last year, I wrote a proposal and submitted it to the British Canoeing Marathon Racing Committee (MRC). It can be seen at:

After a number of iterations, I got the support of the MRC to pilot some events during 2015, to test a standard race format to establish a national series. I setup a web site to manage this and wrote to all the Hasler race organisers to see which clubs would support a time trial race.

The web site is at:

I’ve got about seven or eight races scheduled, and the first race is at the Worcester Hasler event tomorrow.

“Unfortunately” it clashes with several other events on the same day:

So there may not be many entrants, but it does give me the opportunity to test the organisation.

I bought a couple of radio controlled clocks to set paddlers off at the start and to record their finish times. These are the same clocks used by Newbury Canoe Club for the Waterside Series.

As they are radio controlled, they are always synchronised.

I also had some numbers made up. These are to the new MRC specification.

I’ve got a union flag to mark the start, and a chequered flag for the finish. I’ve even knocked up a marker buoy for the top turn.

Looking at the best course for ten miles, I had originally planned to portage the downstream lock at Diglis. I checked it out on Google earth and it looked as straight forward as a Thames Lock. WRONG! There is about a 5 metre drop to the water at the get-out and put-in. I even considered portaging the weir face, but it just looked too dodgy.

So I went up to Worcester last week to recce the upstream portage at Bevere Lock. But it is literally just downstream of the weir face and the river was up. It is a beach (mud) get-out, a fairly long walk through a meadow, and a beach (more mud) put-in.

Having reviewed the GoPro video, and due to the experience with the portage and high water conditions, I decided to err on the side of caution and just use the section between the two locks.

So, the race will run however many paddles turn up.