Reading Canoe Club were kind enough to allow me to run a canoe time trial in conjunction with their K4 race event on Sunday 31st May.

I had hoped to do it alongside their Hasler, but after the controversy of the Thameside 2 senior start, they didn’t need any potential distractions from the Hasler racing.

I did paddle their Hasler Div 7 race in my canoe. There were thirty one boats on the start and it was a tad bumpy. It wasn’t my stability which was affected, but the random waves made steering quite a challenge with copious amounts of switching to try to keep the boat straight and avoid hitting any of the kayaks.

This was what the Div 6 start looked like, and they only had twenty four boats:

I did manage to overtake six boats to the top turn, but once again they nipped inside as I tried to bring The Darkness around. I caught them back up again on the downstream leg. For some reason they were hugging the bank whilst I was out in mid-stream. Two of them again passed me at the bottom turn and I eventually came 25th, just 20 seconds away from demotion (oh the shame!!).

I took the opportunity to put some posters up and attached some leaflets to vehicles in the car park advertising next Sunday’s canoe TT. And so, on the following Sunday I setup a Registration desk next to the K4 one and waited for hordes of canoeists to queue up for the time trial.

Whilst I didn’t get quantity, I was fortunate to get some quality paddlers in the shape of Pete Jones, who won the C1 class of the DW this year and Lucy Perry, who already had a ten mile TT time to beat. The DW ladies C2 winning crew of Liz Murnaghan and Vicky Metcalfe were also up for setting a C2 time to beat.

I had planned the course meticulously and provided a detailed portage diagram:

I had discussed the event with the lock keeper at Mapledurham and, had written consent from the Environment Agency to run the race.

After Registration closed, I paddled up to the turn with my marker buoy. My start/finish team did their stuff, and I had Marshalls at the get-out and put-in positions at the lock.

First to arrive at the turn was the blue George Oliver KII C2, closely followed by Pete in his Wenonah J203, and then Lucy in The Darkness. 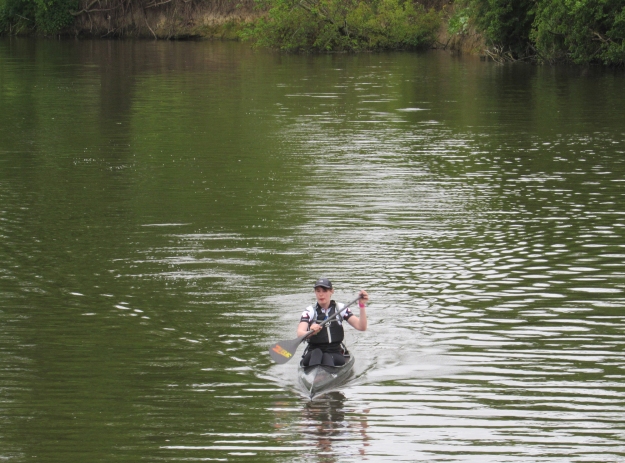 The weather was intermittent light rain, plus a gusty breeze and the temperature was about fifteen degrees, so certainly not unpleasant.

I retrieved the buoy and paddled back to the start. On the way back downstream, I was lucky to witness the start of one of the K4 races. It was quite a spectacle to see ten K4s sprinting off the start at water level.

The finishing times were:

Lucy said it was harder than the Worcester course due to the slower current, plus the two portages.

That’s two races completed of the eight planned for this year. Next up is Leighton Buzzard on Sunday 21st June. This one has about eight portages and is on a canal, so it should be fun.