It’s been a while since I wrote last and life would have it, stuff has been happening.

The Leighton Buzzard TT was well organised in my absence and we had the first high-kneeling C1 entrant. As I wasn’t there, there isn’t much I can say about it other than I was pleased that a race doesn’t rely on me.

However, I was able to put on the forth event at Wokingham on, which saw four boats and five paddlers take on the ten mile course from Wokingham Canoe Club to Marpledurham and back. There’s a short summary of the event available from: http://www.darksidecanoes.com/nctt_s.html

The next event is this Sunday 2nd August at Richmond Canoe Club, another ten mile up-and-back.

In the meantime I’ve been saving up to move my C2 forward and I’m pleased to say it is making slow progress. The plug was sprayed with primer, ready for filling and fining and it was discovered that the fibre glass had lifted in a couple of places on the polystyrene shape. This wasn’t evident whilst the peel-ply was still on. 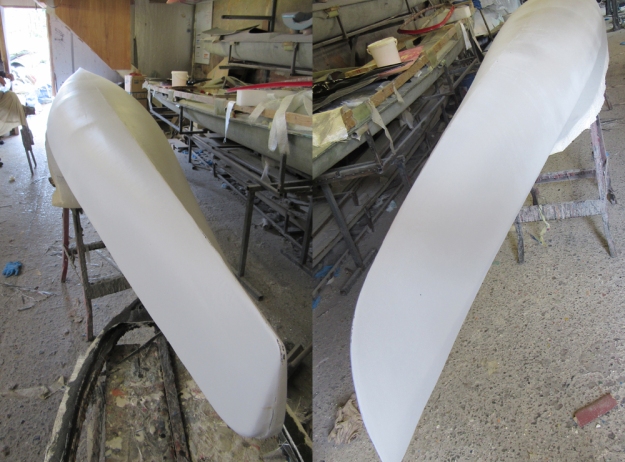 Anyway, it’s in hand and about to be covered with filler to produce a perfect shape and surface for the mold.

I’ve also continued to experiment with paddle design and after much testing, I’ve come to the conclusion that none of my current ideas make any difference! Over numerous timed distances I’ve changed the blades and the times are almost identical, although when I’ve used the big blades, my stomach muscles are rock hard (but sadly not in a six-pack way).

I paddled the Basingstoke Canal Canoe Club (BCCC) six mile Hare and Hounds the other day using the original Wenonah paddle and recorded a PB of 62 minutes 1 second.

My new hypothesis is to reduce the size of my paddle blade towards that of the Wenonah, but keep the lower grippy edge. The theory is that I can achieve a higher cadence but avoid the need to exert so much effort.

Out came my new jigsaw. The first time I’ve gone for a professional model instead of a DIY one. A £129 beast of a device which made short work of my carbon blade. 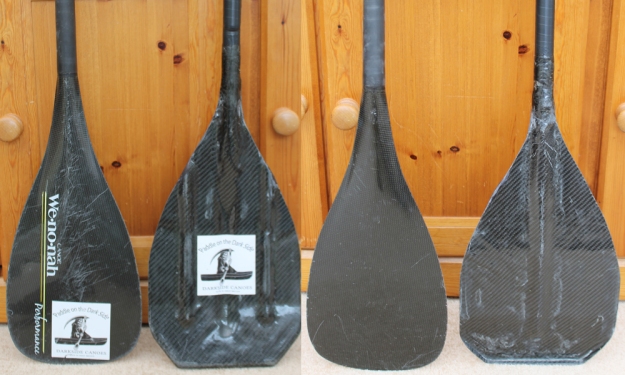 The shape is becoming closer to the Wenonah and it is now only 530 grams against the Wenonah at 391 grams. I’ve lowered the hand grip closer to the blade and also reduced the length of the shaft. I don’t think there was any real benefit from the additional leverage. 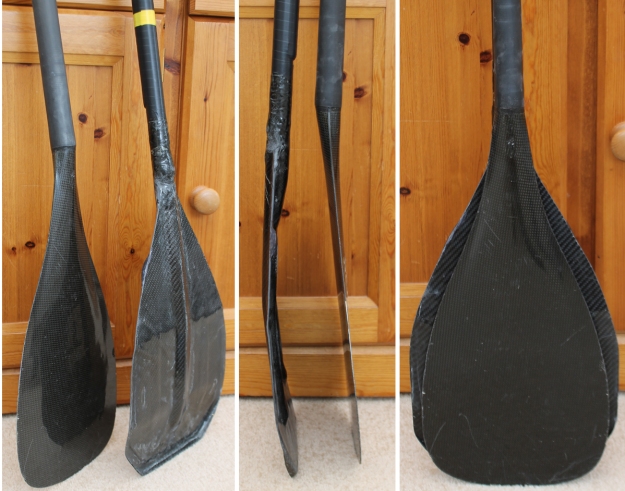 As before, I am convinced that this time I’ve got it right (again!).

I spoke with Liz Murnahan after the BCCC Hare & Hounds. She has just recorded her fastest time in 16 years and had been promoted to Division five at her last Hasler race. Liz attributes her increase in performance to a winter of C2 canoe training for the DW. Apparently sit&switch paddling can improve the catch phase of the kayak paddle stroke.

I’m tempted to have a go at this kayak lark to see if I could achieve a similar benefit, shame I sold my Jaguar some time ago.