I had built up the height of the deck on the new boat because I was concerned about the amount of freeboard on the boat. So I starting taking more interest in the K2 designs and was surprised just how close to the edge some of the designs are.

This was particularly illustrated by photographs from the Thameside II race where the water was quite choppy. The K2 decks weren’t swamped but the low level certainly necessitated spray decks. This did however reduce the profile above the water line which was beneficial in the strong head wind that day.

Contrast this with the amount of freeboard on the Wenonah ICF.

All of the boat surfaces above the waterline are subjected to the influence of the wind. This deep design is necessary due to the fully open cockpit area, and the risk of swapping.

Meanwhile, progress on the new C2 design plug is moving ahead.

Top: treat all timescales from boat builders with a huge pinch of salt!

To be fair, they have put in a huge amount of work, taking my rather crude model and refining it towards something far more superior.

The first task was to cover it with a thick layer of filler.

This helped get a good idea of the final shape and provide a base for finer shaping. We wanted to avoid shape edges, but these were kept until the end so we could see the symmetry.

The groove for the spray deck was made deeper so that the tops of the gunwales would not be wider that the boat. 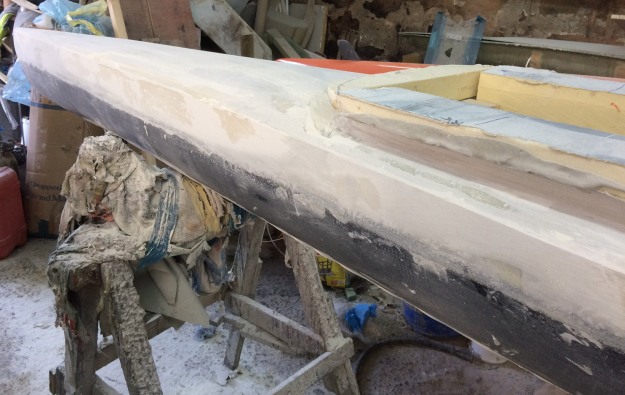 The weight of the additional filler caused the boat to bow. A long piece of timber was secured within the hold to add strength, and a strip of foam was secured to the hull to show where the new level was. Even more filler was added to fill the bend.

Gradually the shape was built up to eliminate any rocker throughout the length of the hull. This would ensure the true and straight tracking which was witnessed during testing of the early prototype.

Once the shape was defined, additional layers of finer filler were applied.

I kept the transom shape of the stern which is a distinctive feature of DarkSide canoe designs. The rear deck is flat, and the sharp edges have now been rounded.

The rounded edges makes manufacturing with carbon easier as it is not required to bend into angles which risk trapped air pockets.

The front deck is also flat. It won’t shed water as quickly as a steep design, but it will be more comfortable to portage upside down on the shoulder, and easier to mount handles and lights.

The hull is also complete.

The rim along the top of the gunwale is retained. Again, another feature of my boats and key to support the full length spray deck.

Two final coats of resin were applied ready for the last rubbing down and polishing in preparation to make the mold. 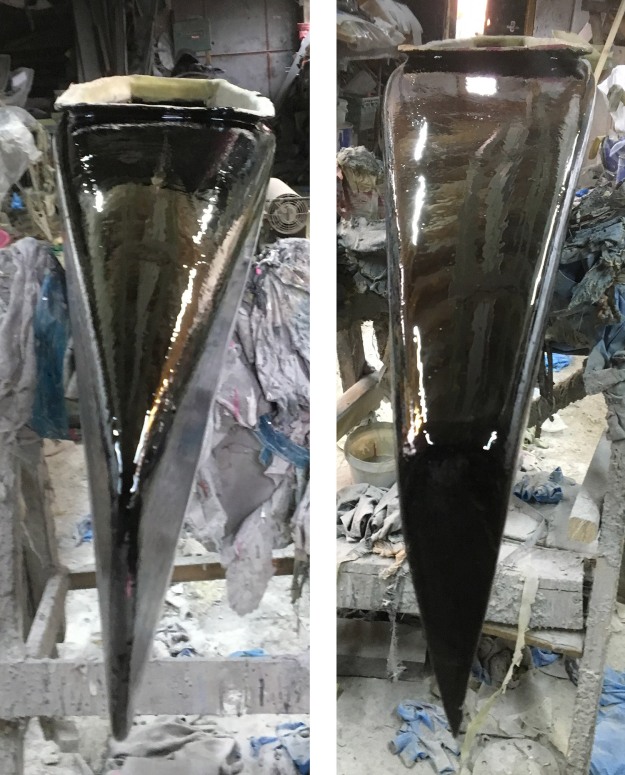 It does look nice with a gloss black finish, but it will be manufactured in raw carbon with a layer of carbon/Kevlar. I have some ideas regarding the construction which will ensure a light, strong and rigid boat.

It’s almost temping to jump in and paddle it now, but I’m confident the wait will be worth it.

Onwards to the mold.