Now that I have what I consider to be the ultimate racing C1, I need to look closer on propulsion options.

I currently use a Wenonah performance paddle. I’m quite happy with this blade, but it is simply a flat surface, and when you compare this with a kayak wing paddle and look at the development in kayak paddling, I can’t help but think that there must be something better.

The sit&switch paddling style have been much influenced by the American Pro-series paddlers. As such, the paddle manufacturers have developed paddles and blades which work best with boats which tend to be wide (and stable), with the paddler sat quite high to the surface of the water. But there doesn’t seem to be much innovation on sit&switch racing canoe paddles. Maybe the designs available really are as good as it can get.

In a C1 conforming to the American racing specification, the paddle style is also affected by the wide portion of boat, necessitating the movement of the paddle away from the boat and an early exit at the end of the stroke, to avoid hitting it. To me, this seems just at the most efficient part of the power phase. However, pro-boat racers also use a high cadence and short stroke to get the boat up out of the water and planing. This is due to the somewhat shallow, flat design of the hull.

A lot of the pro-racers adopt a forward and backward rocking style and seem to have very little trunk rotation, relying heavily on the shoulders rather than the full body rotation favoured by kayakers. The rocking motion also upsets the smoothness of the boat and increases drag, when the bow moves up and down as weight is transferred fore and aft. This isn’t so pronounced in an 18’ 6” C1, but in the C2 pro-boat, it just doesn’t seem very efficient.

I’ve also noticed how close the position of the lower hand is on the shaft relative to the top of the paddle blade. If it’s too close to the blade, there is little or no leverage from the shaft.

I like to use a body rotation from the hips and push with the legs, so traditional racing canoe paddles don’t fit with how I want to paddle the boat. I need something which is a compromise between a kayak and a canoe blade.

I have studied many books and YouTube videos of racing kayak and canoe footage to analyse the best styles in order to define a hybrid which takes the best compromise between the two. Obviously, this will require a hybrid paddle which exploits the best features of a canoe blade and a kayak blade, but integrated within a compromise design.

The blade has to be symmetrical because it has to perform consistently on both sides of the boat, so I can’t use the wing principle because a leading edge is required on one side of the blade, and a trailing edge on the other.

I’ve also been looking at Stand Up Paddle-Boarding (SUP) paddles as development seems to have benefitted from the increasing popularity of the sport. But how can a blade that is (supposedly) optimised for SUP, where the blade is pretty much perpendicular due to the length of the shaft, and also work in a canoe where the angle of entry is so much shallower due to the height of the paddler relative to the water and the length of the shaft?

SUP also appears to be influenced by fashion and some of the radical paddle designs are probably not very efficient.

Superwicki – a dihedral plus a depression on the power face 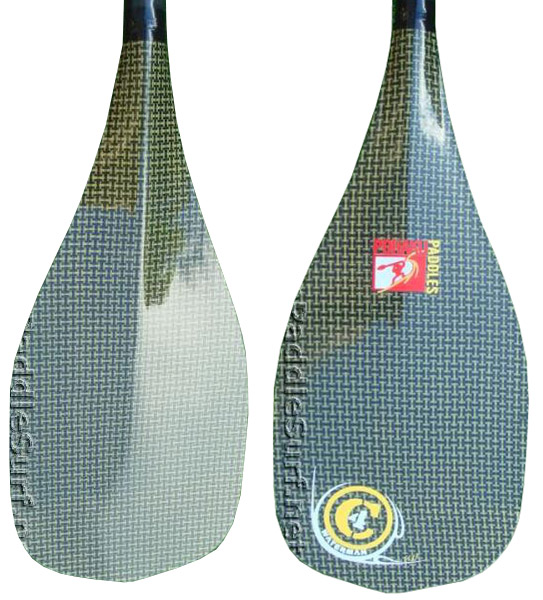 The Waterman which has a flexible tip 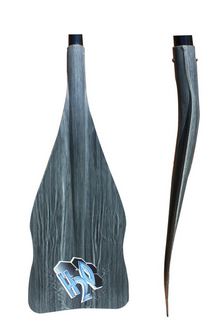 Paddle from H2O, what’s that about? 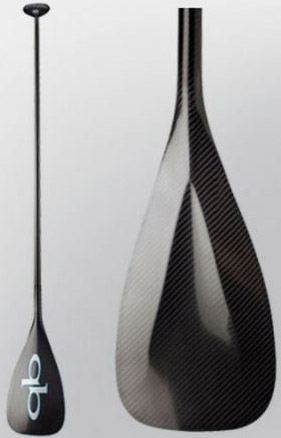 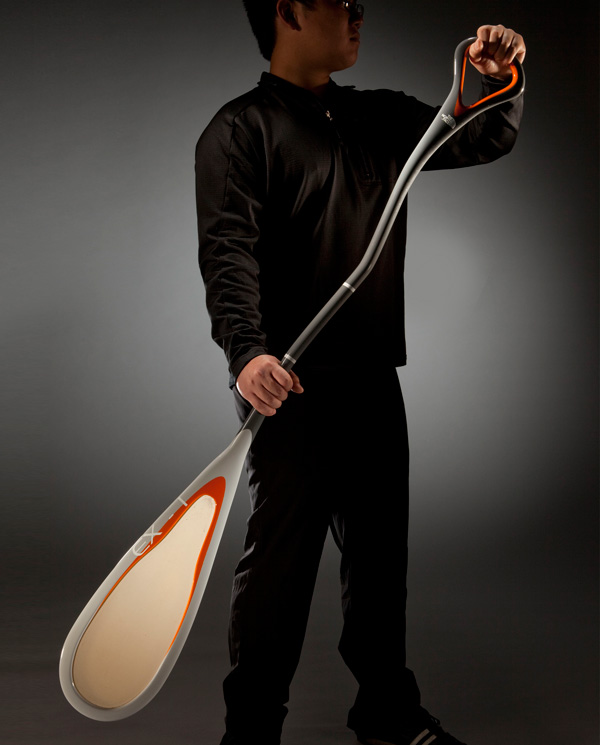 So basically in SUP, anything seems to go, but goodness knows how effective it is.

Meanwhile, back in canoeing land, I’ve decided to create my own paddle. I mean, how hard can it be?

The basic principle of paddling, is that the blade remains stationary and the boat is pulled past the paddle. So surely, the blade should be designed such that it is difficult to actually move it in the water? In my mind, this means a bigger surface area.

The blade is also most efficient when it is perpendicular (upright) to the water.

In the illustration below, the canoeist is using a short stroke at high cadence. At point A, the catch, water is probably traveling down the blade and over the tip. At point B, the blade is at the optimum angle. At C, the water starts to travel up the paddle and it’s time to exit.

The way I paddle with a longer stroke, more of the stroke is inefficient because the blade is not perpendicular to the water for very long. In fact I’m probably only pushing water backwards towards the end of the stroke, rather than pulling (or pushing in this instance) the boat past (away from) the paddle.

So I need a different type of paddle with a blade which is more efficient, more of the time.

My first effort to make a paddle, was to simply increase the surface area (bigger than my Wenonah Performance blade), put a curve along the whole length, and implement a “grip” along the tip.

So I constructed a mold out of thin plywood and put at block on the end to bend the carbon fibre around the produce the grippy edge. I forced a curve in the blade by gluing a baton on the back, which I then used as a dihedral blending seamlessly into the shaft.

I used a piece of carbon tube insert into an aluminium shaft. This was an old kayak shaft recovered from the paddle I used in DW 1978. Luckily I kept it. My wife is always telling me how clever I am to keep so much “useful stuff” in my garage. (I think that’s what she said  )

Anyway I put three layers of 200 gram carbon fibre cloth on, plus a bit of strengthening where the shaft met the blade, and produced the backside of the blade. 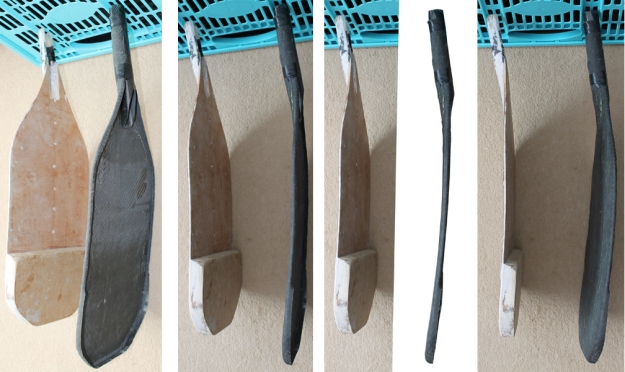 Version 1 – back of blade

So far, so good, I just need to make the other side and pop it on a shaft.

So I filled the paddle with a piece of polyurethane foam and sanded it until I had a shallow depression on the power side. A couple of layers of carbon sandwiched the shaft between the two sides, and then I put it in one of the vacuum packing bags one normally uses to reduce the size of clothes to put in a suitcase. I got quite a good vacuum using my trusty Dyson. 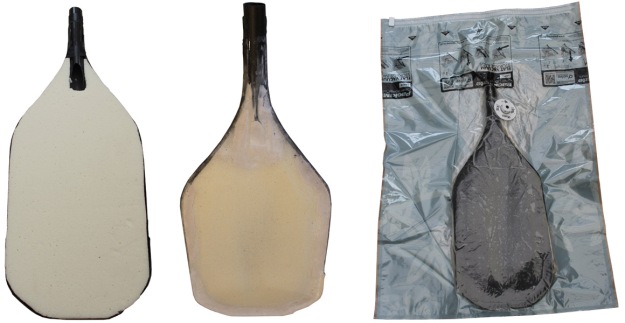 Version 1 – power side of blade

I secured it onto the shaft and compared it to the Wenonah.

I think it’s fair to say, that it turned out nothing like what I’d imagined. Not much bigger, and the foam had pretty much filled in the curve on the blade and the grippy edge. The Wenonah paddle weighs 391 grams and my paddle came in at 709 grams. I think most of this is the aluminium shaft and solid plastic top grip.

I thought I’d try it anyway, and launched from Dreadnought Reach onto the Thames from Marsport. It wasn’t too bad paddling forward and I was pretty confident it wouldn’t break.

But I had to turn the boat, and with a backwards stroke I heard an ominous crack! “Damn and blast”, I exclaimed! I gingerly made my way to the bank to retrieve my Wenonah blade from under my seat.

I knew that Craig had made some paddles in the past, so I popped into Marsport and had a word. His advice was to leave it to the professionals. Pah! If there’s one thing you don’t tell a child or an elderly gentleman, is that they can’t do something.

So, this time I thought I’d err on the side of strength. I would incorporate the plywood within the blade. I also used an oak broom handle to attach the shaft, cut a slit in the shaft so that it was forced both sides of the blade, and extended the blade to enclose more of the shaft. 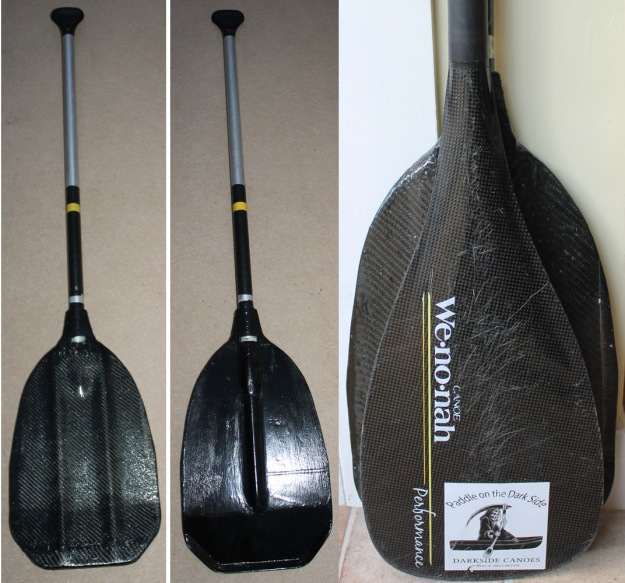 The blade is strengthened with two batons on the back and one on the front (also acting as a dihedral). I painted the power face of the paddle and put a layer of carbon on the back, just in case.

I call this paddle “Big Mamma”. It is bigger than the Wenonah and weighs in at a hefty 988 grams (just shy of 1 kg).

I knew from the first paddle stroke that I was on the right track. I was able to pull so hard on the shaft without the blade simply moving through the water. OK, it weighs a ton, but I can fix that. The grippy edge makes the catch a bit untidy, but I’m more interested in the power phase.

Having made a few mistakes, I’m now in a better position to move onto version three. This will have three power faces plus a grippy edge, which will extend around the bottom sides of the paddle.

The (my) theory is that more of the paddle face will be perpendicular during the whole phase of the stroke, as illustrated below.

I’ve made the mould for the power face and used two layers of carbon fibre fabric, with significant strengthening towards the shaft. The 28mm carbon shaft will be delivered this week and I will integrate this deeper into the blade before I build the other side.

I’m still making mistakes. I should have made a positive power side mould and not a negative one, as it was difficult to force the carbon fabric to bend into the grippy edge. However, I will complete this version and test it on the water.

I reckon that by version 56, I’ll be getting close to what I want. “leave it to the professionals”, yeah right!